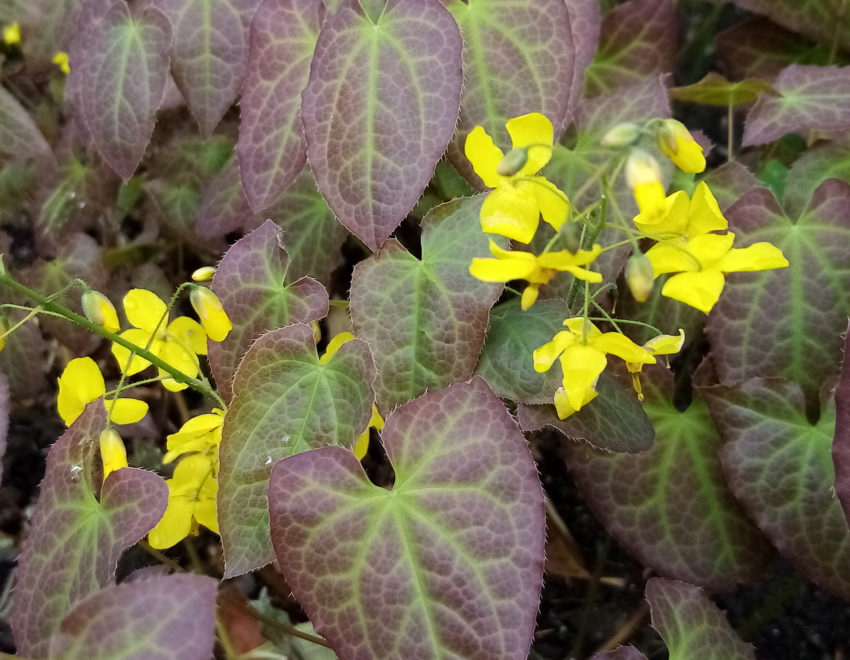 Long ago, when I first started to garden I was confronted by hundreds of metres of bare space beneath ancient beeches. The soil was thin, too dry for hellebores and spring bulbs, too dark for some of the understorey shrubs I wanted to use. Research led me to two plants, the first was Brunnera which I have written about previously and the second was Epimedium × perralchicum ‘Fröhnleiten’. My experiment started with twenty small divisions of this plant. A summer dry spell left me nervously wondering if they would make it to spring. That spring they grew, flowered and set out to make the earth their own. Now, they carpet the ground under shrubs. hold dry banks together and add a tough evergreen carpet anywhere thats challenging. They have become a hero of my garden.
I made mistakes though; all Epimediums are not the same! There are Epimediums from Asia and Epimediums from Europe, generally the Asian species are better grown in a moist soil with some shade, the European including Epimedium × perralchicum ‘Fröhnleiten’ are suited to dryer conditions. After trying several Asian varieties alongside European varieties I learned that dry shade is an unforgiving place that needed a cool customer to deal with it.

Epimedium is a big genus with over 60 named species and many more hybrids particularly in the past number of years. They fall into the Berberidacae family which includes Berberis and there is a direct similarity in how the flowers are made up.
Epimedium × perralchicum ‘Fröhnleiten’ is a survivor and an inspiring plant. It grows from a matted network of rhizomes and sends clusters of wiry stems clothed with evergreen leaves which stay fresh all year long. In addition in early February it sends out even taller stems with tiny arrangements of sulphur yellow flowers which persist for many weeks. Many of the flower styles on Epimedium look like tiny bishops hats and lend credence to the name ‘Bishops Hat’. Flowers are followed by all the new leaves which are veined and tinted purple for a few magic weeks in late March.

These are one of the easiest plants to grow; propagation is by division in early summer, maintenance of the plant is simple – a trim back of all leaves in mid January will allow the new flowers to emerge in early February and not battle with leaves obscuring them. There is no other work apart from division if you want to increase your stock. In my garden they spread slowly but surely but never in a troublesome way. Their presence should always be welcomed with open arms by any rational gardener.

In my garden I use these with Pachyphragma macrophyllum, Brunnera species, Symphytum and smaller shrubs. I use them to edge paths in full sun, hold banks together, cover under shrubs and generally create beautiful carpets of no- nonsense ground cover.
If this is not on your list of plants it should be. Easy, dependable, good to look at and low maintenance with nice flowers. What else could you want? Search it out!