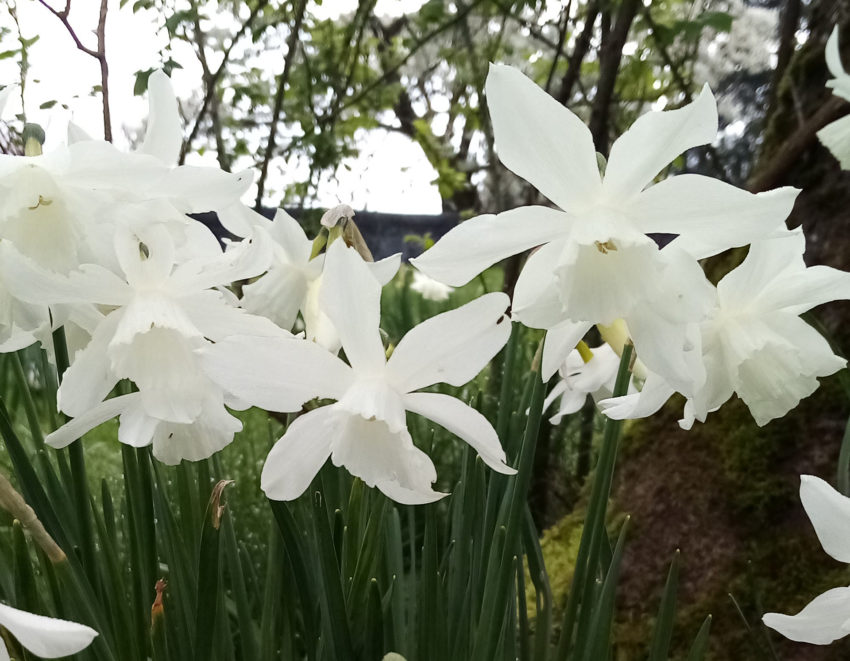 In late March I walk around the small meadow at the bottom of my garden and carefully scan the ground, usually there are snowdrops still in bloom marking the transition from early spring to mid spring. This is a meadow I have worked on for many years; taking out weeds by hand, introducing comfreys, erodiums, hardy cranesbills, muscari – all plants to build up an interesting carpet of insect friendly blooms into summer. Despite my close inspections what I am really looking for are the shoots of Narcissus ‘Thalia’. Seven years ago I bought 10,000 bulbs from a wholesale supplier. In two frenzied September weekends, I planted them all, trowel in hand, spade for the harder soil, I scattered clumps, made drifts and waited.

The following spring I watched, and watched, and watched. Only a few shoots were showing, a disaster I thought, but no, Thalia takes her time. Within weeks the slender shoots were reaching up. By early April the first blooms were showing, by the middle of the month the meadow was full of pristine white blooms, gently swaying in the breeze. The early morning sun caught their whiteness, the setting sun dropped a cloak of gentle pink across them. I was unable to watch anything else for weeks. The best viewing was during a full moon with thousands of blooms glowing under spring moonlight. Moments like these make me realise why I garden and the aches, pains and toil of the planting period are long forgotten.

Narcissus ‘Thalia’ are my favourite daffodil. Without question. That’s a big statement, especially given how many different kind of daffodils there are out there. I have always loved plants with a personality and this is a plant that makes it own rules; too dry a soil and it sulks, too much shade and it stops flowering but give it a sunny slope in grass and it shows its true elegance and poise. You must always remember that Thalia will turn to face the sun so think about that when you place them- in the morning they will be a little different by the time evening sun arrives. Thalia gives a lot – once established they offer 2 -5 flowers per stem giving you much more than double the bang for your buck. They increase slowly but steadily so the clumps build nicely. They have elegant, slim foliage (despite being up to 14 inches tall) so it does not yellow and die in visible mounds, instead she neatly tucks her performance away for another year. Finally the perfume, rarely mentioned but very definitely there, a rich musky and sweet fragrance especially at night- notes of jasmine, musk and mandarin. Thalia has a stately but whimsical elegance and is a nod to the days when plant breeders knew the difference between presence and size.

Anyone who sees Thalia for the first time could be forgiven for thinking it is a delicate little thing, nothing could be further from the truth. Demure in appearance but steely within – she will withstand rain, hail and wind and  float effortlessly through the worst of spring squalls.

As with plants families it is good to know a little about what they like and where they come from.
Narcissus ‘Thalia’ is a member of Narcissus a plant genus of about 50 species of bulbous perennials from Europe and North Africa. Many of us will know that the genus name honors Narcissus – a hunter in Greek mythology, who after a disagreement with the nymph Echo in the forest was brought to a pool in the woods by Nemesis the goddess of revenge. So  taken was Narcissus with his reflection in the water that he bent to kiss his reflection and drowned. Amid all the drama and beauty Narcissus met his end by wanting to hold on to the fleeting reflection. It’s easy to see why the use of his name for this genus is particularly apt.

For those with more than a passing interest in botany and not mythology it’s also good to know that Narcissus has been arranged into 13 different divisions based on flower colour and size. Lots to explore! Thalia comes from the bloodlines of the original Narcissus triandrus found in the wild and first entered cultivation in 1916. Since then it has been gracing gardens with its simplicity and understatement.
Most Narcissus will work well in grass and Thalia certainly does; she also works beautifully in containers, coupled with Tulipa viridiflora ‘Spring Green’ or any of the early wallflowers or white muscari it makes a statement that stops all in their tracks. In my experience it has a very special affinity with zinc containers, the aged patina of the zinc setting off the colour of the white flowers beautifully. This is a plant worth trying, once you try I think you too may be like Narcissus and fall in love with what you see reflected in front of you.