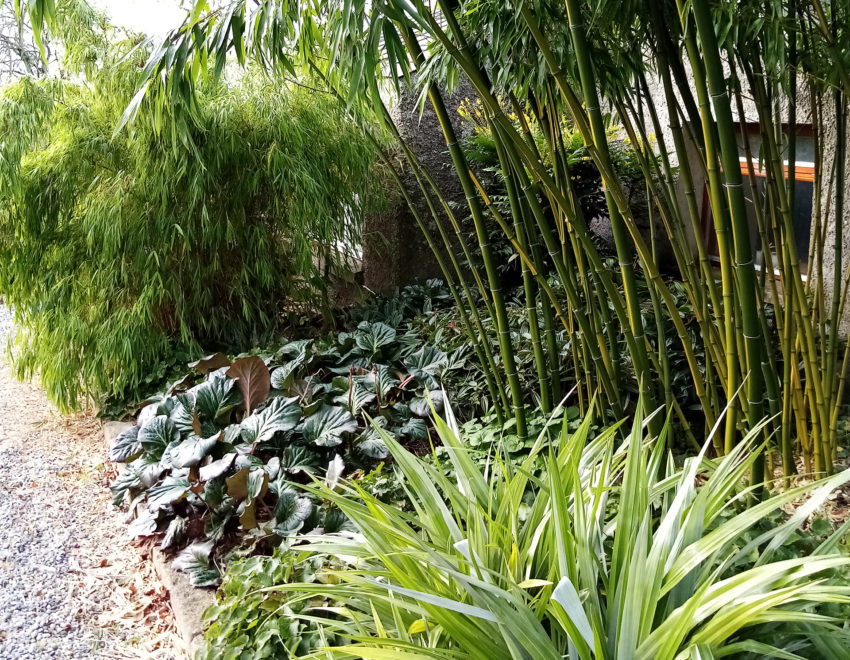 Bamboo – the word conjures fear for many people. ‘isn’t it invasive? Will it grow too big – does it not run through the flower beds. Bamboos get a bad rap. Their reputation spoiled by lots of collective experiences with the more vigorous varieties. It’s a pity because nearly every garden can benefit from a bamboo in their garden and yet only the brave amongst the garden community take the challenge.

Taking the challenge of having a bamboo (or several) in your garden is one which is very much rewarded. Picking the right bamboo gives you instant height, graceful movement, evergreen interest, fantastic stem colour and most importantly a vertical backdrop which is hard to replicate with any other plant. There is a bamboo for every situation and clever gardeners will use this fact to their advantage.

One of the most often cited reasons for not using bamboos (apart from the invasiveness question) is that they will look too ‘modern’. I disagree, placed properly and using the right contrasting shrubs they will fit in perfectly. It’s worth remembering than many 18th century gardens had bamboos as specimens and used as ground cover, even today many old estates bear the survivors of plantings over a hundred years ago. Of course if you have a slick, modern garden they are just the thing; low maintenance, evergreen and they really shine particularly if combined with architectural elements such as water bowls, limestone steps and gravel. They are pleasing, calming and easy on the eye.

‘Huangwenzhu’ is one of the named cultivars of the pretty awesome parent the giant timber bamboo Phyllostachys vivax. This parent bamboo grows up to 75 feet and has bestowed much of it’s lust for life onto ‘Huangwenzhu’.

I planted three specimens of Phyllostachys vivax ‘Huangwenzhu’ in my garden eight years ago. Since then they have grown to 20 feet but their spread has not increased significantly, their clumps have grown a little bigger but are very manageable.

I grow this plant because it is phenomenally beautiful but the real talking point are the canes which arise every summer from May onwards. In the space of a week or two the spear like shoots erupt and climb into the blue sky. Once up they open their leaves along the base of the stem into all their glory. The last part of the act is the shedding of the sheath, a papery covering which lies between each knuckle on the stem. Once this is dropped the true beauty of the bamboo is unveiled. The canes are deep emerald green and in every second junction after the knuckle there is a bright yellow stripe. Collectively these stripes provide a dazzlig pattern which persists all year.

Bamboo do not put on secondary growth in general, most growing of a cane is done in year one so the stems provided in year two may get thicker or add more leaves but the height stays the same. Maintenance is simple – once the new stems are in place I use a small pruning saw to remove the 3 – 4 inch thick old stems at ground level, this allows light in, water to get to the roots and allows the stems to move in the wind a little. Every June I remove all the leaves from the stems up to about five feet – this allows the stems full visibility and allows the colour to shine through.
Gardening for me is an adventure and you can’t adventure without taking risks. If you want your garden to have another dimension of structure, colour and interest you can do no better than getting up close and personal to one of the most beautiful plants available to you. Take the step and don’t look back!